In 2020 a total of 504 individuals registered as COMSEP members representing 152 medical schools across the United States and Canada.

Demographic Characteristics: The majority of respondent were female (61%). By age, 32% were younger than 41 years old, 39% were 41-50 years, 19% were 51-60 years, and 10% were more than 60 years old. The vast majority of respondents were physicians (96%), with the highest degrees of the remainder being Doctor of Osteopathic Medicine (2%), PhD (2%), a Master’s degree (22%) or other (5%). Being certified in a clinical subspecialty made up 29.4% of respondents, with the most common being infectious disease (20.4%), followed by pediatric emergency medicine, pediatric nephrology, and neonatology (each accounting for 10.2% of the population). 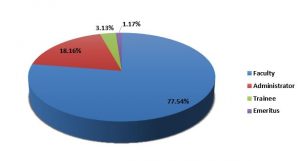 Clerkship Roles: The current primary educator position of the majority of respondents was Clerkship Directors (59%), while 10% were Assistant- or Associate- Clerkship Directors, 13% were associated with a dean’s offices, 7% were Director or Assistant Director of 4th year pediatric clerkships, 4% were site or service directors of a clerkship, 2% were teaching faculty and 4% had other positions. The length of respondent’s’ service in any clerkship role ranged from less than a year to 40 years, with an average of 12.3 years.

Get involved with COMSEP

There are many different opportunities to become involved with COMSEP – something for everyone!